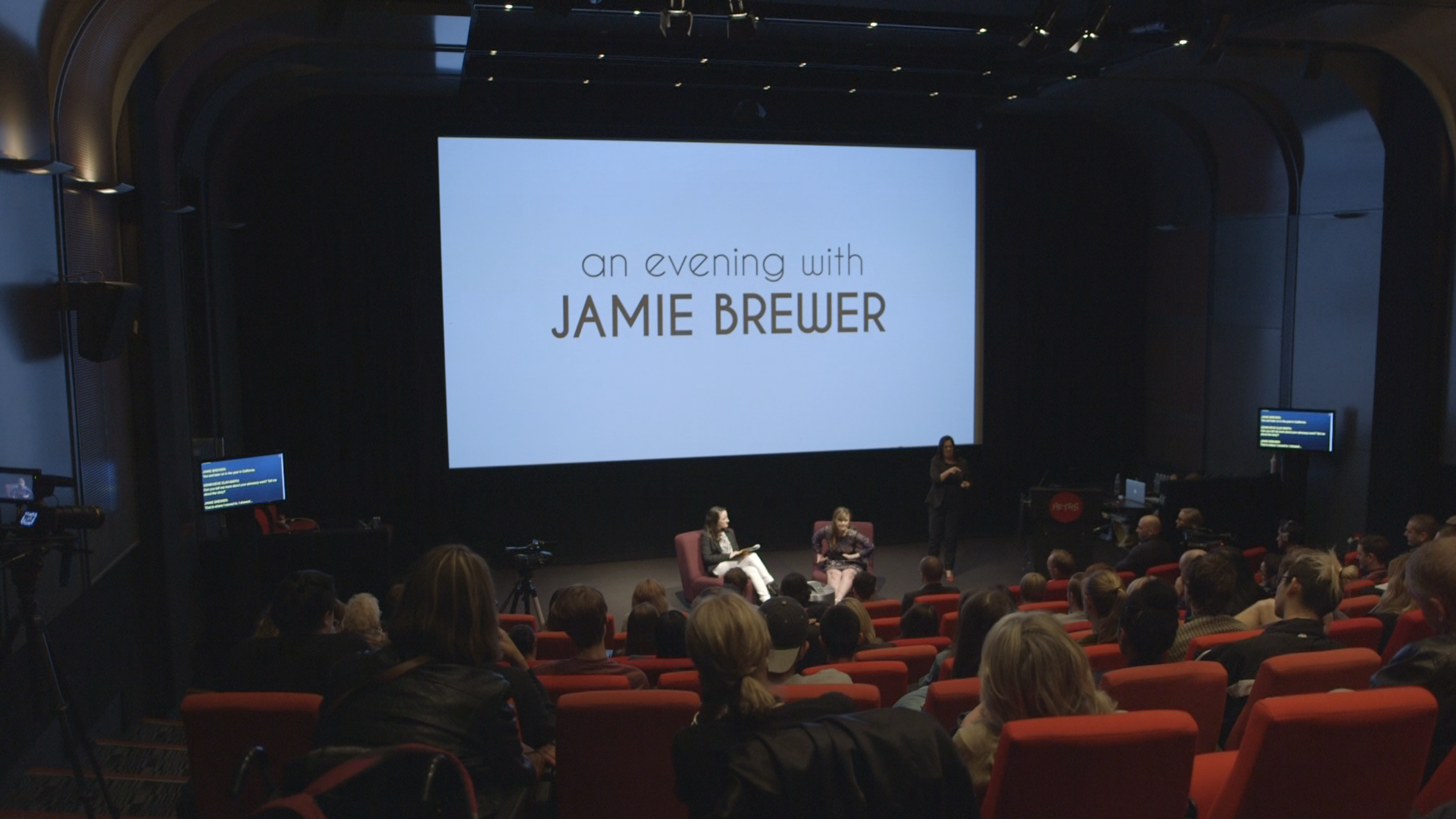 Advocacy, Inclusion and Diversity: An Evening with Jamie Brewer

We were very proud to be at the helm of bringing Jamie Brewer to Australia to work with our students on our upcoming film ‘Kill Off’. But we wanted to go a step further. Jamie is an advocate and our film industry needs some help in becoming more diverse and inclusive. So we partnered with the Australian Film Television and Radio School (AFTRS) and Screen NSW to put on an advocacy night: “An Evening with Jamie Brewer; thoughts and reflections on diversity and inclusion in the film industry.”

Excitement buzzed on the night of May 25th, as Bus Stop Films along with AFTRS and Screen NSW prepared for a night of rich discussion surrounding inclusion and diversity both in front of the camera and behind it.

Our master of ceremonies was the effervescent Tracey Corbin-Matchett, Project Officer Stakeholder Relations and Industry Development at Screen NSW, who guided us through a range of speakers contributing alongside Jamie Brewer. Among the speakers were Courtney Gibson (CEO of Screen NSW), Martin Brown (head of awards courses at AFTRS), Paralympian Paul Nunnari, film critic Luke Buckmaster, our very own Film Club participant Nathan Basha, and Co-Founder and Executive Director of Bus Stop Films, Genevieve Clay-Smith. Together, they shared their thoughts and reflections on the representation of disability in the film industry and called on everyone to consider the impact of subconscious bias as well as encourage opportunities that promote the inclusion of people with disability in the film and television industry.

Jamie Brewer, star of American Horror Story and advocate for people with a disability, graced the night with her powerful talk and engaging answers during a Q&A session with Bus Stop’s co-founder Genevieve Clay-Smith.

As keynote speaker for the evening, Brewer spoke about her career and beliefs to a packed out audience of 126 at the AFTRS Theatre. More than just an actress, Jamie was the first ever woman with Down syndrome to walk the runway at New York Fashion Week. She’s also an active advocate who helped change terminology within Texan legislation. She was part of a committee who spoke with senators in an effort to abolish the term, ‘retardation’ and have it changed to ‘intellectual developmental disability’ throughout legislation in Texas. The audience’s reaction to Jamie’s political accomplishments was overwhelming. Applause filled the auditorium as she spoke of her world changing work. In her speech, Brewer called for global inclusion, encouraging everyone to: “…advocate for a more healthier and inclusive world today.”

Brewer’s call for a more inclusive world, unfortunately doesn’t only apply to the creative industry. A lack of inclusion is also prevalent in other workplaces too as people with disabilities are overlooked, unwittingly assumed to only be capable of specific tasks – creating, a sense of a “parallel universe” between people with and without disabilities. Courtney Gibson poignantly captured this rift which she noted is borne from a separation in the workplace. The remedy? Have them work together, introduce proximity, and include everyone in the conversation because, “Unless you introduce people with a disability working with people without a disability, there will always be a parallel universe.” Courtney further emphasised Screen NSW’s commitment to building a more inclusive film industry. She urged that while there is a large movement towards more inclusion of women in the industry, we shouldn’t forget all the other minorities, “underrepresented groups should not be elbowing each other out of the way to get heard.”

The stories within film and television are supposed to reflect our society. However, the lack of diversity on our screens highlights a major issue that the voices of those with a disability are not being heard or represented and if they are they are being represented without consultation.

Martin Brown, head of awards courses at AFTRS, contributed to the night by voicing AFTRS’ commitment to inclusion and accessibility “This will not happen overnight, but I am committed to deliver equitable access to what the school has to offer. I hope that students from all backgrounds will go on to redefine our screen culture.” He also pointed out that in the context of the ‘Netflix revolution’ audiences are having more and more say over the content being created and that, “The formula used to select the lowest denominator content for the widest audience is loosening. I do trust the audience. I think stories including diversity and inclusion should not be the exception.”

Paralympian and Manager of Event Access and Inclusion at the Department of Premier and Cabinet, gave a brilliant speech boldly declaring that disability awareness was on the rise but we still need more authentic stories that represent people with a disability in an empowered way. Paul urged us to redefine the current associations connected to disability – that “advantage, opportunity, beauty, confidence, contribution, and strength” should be in our vocabulary when we describe this community. And a key game changer is Bus Stop Films, which he described us as ‘a force of natu<re’.

“When I watch those films, “Be My Brother”, “Work Mate” and “The Interviewer”, I feel proud to be a person with a disability.

More importantly, I feel impressed by the community; the perception of disability has been changed and realigned from what is impossible to what is possible. Just like orange is the new black, disability is becoming the new norm.”

Bus Stop Films student, Nathan Basha gave a stirring presentation which called for equal opportunity in the workforce. Nathan is an international speaker and was a finalist in the 2016 NSW Young Australian of the Year Awards for his advocacy work. During his speech, Nathan told us that:

“Human potential is an exceptional quality of life filled with happiness creativity and fulfilment. However, the potential of some people is limited by social barriers. This is clearly the case when it comes to people with a disability who are not equally valued and included in society. Employment is a key area in which this occurs. ”

Film critic for the Guardian, Luke Buckmaster provided context for the evening, he took us through a brief history of the representation of disability in Australian cinema. He stressed that the pool of texts to choose to speak about was limited, indicating that we definitely need more representations of characters with a disability on our screens. He showed clips from “Annie’s Coming Out” and Rolf De Heer’s “Dance Me to My Song” of which Heather Rose was the writer, a woman with cerebal palsy. Buckmaster praised the performances of the cast members who had a disability, saying they gave more compelling and authentic performances as opposed to the performances given by actors without a disability.

Finally, Genevieve ended the night with a warm thank you and a perfect summary of the rich discussions.

“Tonight has given us an opportunity to reflect upon the status quo and begin the journey of changing it… Let’s also be aware of the power and influence of this industry. When we misrepresent the experience of people with disabilities in our films, due to a lack of consultation, we are showing audiences an inauthentic experience that can perpetuate ignorance and negative stereotypes in our society. It is so important to consult when it comes to representation.”

Thank you to AFTRS and Screen NSW for helping us to make this event possible, and thank you to all those who attended.

Let’s Be Inspired To Use Our Voices, Question Our Biases, And Lift Our Expectations. Lets Create A World Where Inclusion And Diversity Are The Norm.