Filmmaking and Human Rights – my journey with the short film, Gambling with Minds.

Making the short documentary “Gambling with Minds” was a thrilling experience. Every Thursday our group of seven, all of whom were in recovery from facing mental health issues – would get together and learn how to create a documentary. We would warm up by playing a few games with our facilitator Sarah Johnson and then we would start the training.

The journey started when I found a flyer from Bus Stop Films and 3 Bridges offering an opportunity to be trained in documentary studies and make a documentary as a team.

We learned about all different types of documentaries from our film studies tutors Sarah and Genevieve. When it came to choosing a subject to focus on for the documentary, we voted on what we’d like to make our documentary about. Everyone in the class felt it was important to share their experiences of mental health and the mental health system which many of us feel is in need of major reforms. 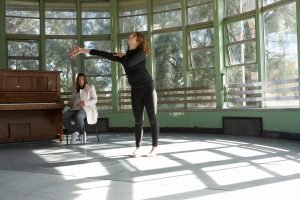 A still from our short film Gambling with Minds, featuring Maja and dancer, Trish.

Through creative development workshops and creative writing workshops we came up with how we wanted our stories told. We decided on poetic methods, like in the documentary PINA, which uses dance. And we also wrote a song which one of the women in the group sang.

Since finishing Gambling with Minds the film has screened at some major festivals, thanks to Bus Stop’s festival strategy. These festivals include Oscar Qualifying film festivals, Cleveland International Film Festival and Sydney’s Flickerfest. It also recently screened at the Human Rights and Arts Film Festival in Melbourne.

I have been fortunate enough to attend two festivals. The world premier of Gambling with Minds at Flickerfest Bondi Beach and the Human Rights and Arts Film Festival (HRAFF) at Federation Square in Melbourne. Bus Stop Films arranged for our group to attend Flickerfest and I received a travel grant from Bus Stop to go to Melbourne, attend the HRAFF and represent the team at the festival.

The team attending the February Flickerfest screening in Bondi and introducing the film.

At both festivals, seeing people’s reaction to the film has been amazing, many people, after watching the film felt they could come and talk to me about their own experiences with mental health or a family member’s experience. It has been very rewarding each time I have watched it with an audience.

At the end of the screening at the HRAFF there was an opportunity to participate on a filmmakers Q and A panel with a moderator and the audience. I won’t lie, I was extremely nervous sitting up the front, before an audience of about 150 people! Once it started though, I relaxed and I really enjoyed answering some of the audience’s questions. Afterwards a lady came up to congratulate me – she was really pleased that we had shone a light onto mental health in NSW. Another lady spoke about her brother’s experience with mental health in Melbourne. She congratulated me on my participation in the film too, she thought it was powerful how everyone involved in making the film wanted to convey their shared experiences of mental health and the mental health system.

Amanda representing the team at the Human Rights and Arts Film Festival in Melbourne.

Amanda is ready to address the audience after the screening of Gambling with Minds.

Within the film itself I remain anonymous as I believe that there is still stigma attached to the mentally ill. I still need to work and earn a living so I decided to remain absent from the camera – but I still share my story, as I feel that the mental health system is flawed and that it failed me and my child. I hope that Gambling with Minds changes the current stigmas that exist around mental health, according to the world health organisation, most people will experience a mental health issue at some point in their lives. So we should be more understanding and more open to talking about mental health as a society.

Gambling with minds is an important film as it shines light on what mental illness is, and what can happen to people within the mental health system. Most of us in the film felt somewhat disadvantaged by having an experience with NSW mental health system, many of us felt betrayed and hurt. We all still talk of our interactions with the NSW mental health system and how common our complaints are. No one can explain the helplessness you feel of being admitted to hospital against your will and having to rely on your doctor’s ability to assess your sanity without the input or opinions of your family who know you better than anyone. Furthermore, the medications they give you can often have more of a negative effect than positive. It’s all an experiment when it comes to medication, no one really knows if it’s going to work for the person – in many cases understanding and practicing mindfulness can be far more effective and less damaging to a person’s body and dignity than taking medication, yet that’s not prescribed – the first option is always medication.

I am in regular contact with the friend I made through the documentary and we see each other all the time. We always talk about being in Gambling with Minds and how much of a positive experience it was. We set out to bring mental illness into the present, and we have strengthened our relationships with one another through the opportunity to explore mental health through cathartic discussions.

The film needed to be made to educate all those whom are not familiar with NSW mental health. Our film ultimately gives society insight into a side of life, that is not often talked about in depth.

I am excited to see where Gambling with Minds goes to next, in the meantime check out this little making of documentary that showcases my peers talking about what the project meant to them:

Written by Amanda, a participant in the program and mental health advocate.