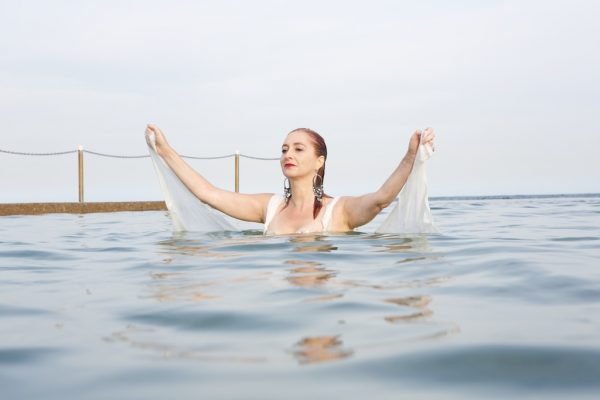 Little did I realise that the words from my poem in our short film “Gratus”- “step-by-step, moment by moment” would become a reality on film.

When I embarked on the inclusive filmmaking course developed and delivered by Bus Stop Films, produced in partnership with 3 Bridges, just over a year ago, I didn’t know that the opportunity would take me to where it has.

It has been one amazing moment after another since being part of the documentary film studies program, with the most recent chapter of the journey, involving myself and another fellow filmmaker “going FAR”, all the way to the Fargo Film Festival in North Dakota.

Not only did our film “Gratus” make it into the festival it also won the award for Best Experimental Film.

Bus Stop Films gave me a filmmaker’s travel grant to support me in attending the Fargo Film Festival and be part of all of the action as well as represent the entire team behind the project including six participants who shared their stories and feature in the film. I had an opportunity to meet film directors, producers and actors from all over the world and share great conversations over meals and fun activities with new friends. By the end I didn’t even notice the cold weather, thanks to my many layers of warm clothes together with the warm hospitality from the Fargo folk.

On the night our film screened we were given the opportunity to be part of a Q&A session. There I was with my fellow filmmaker, Izaak Love, who also received a BSF travel grant, proudly answering questions from the audience and sharing our experience about our involvement in the making of   “Gratus”.

It also became a platform for us to not just focus on the technical side of filmmaking, which Izaak answered really well, but about the emotional aspects of mental health and sharing such personal stories. I was honoured to be able to share my insights in this area and help spread awareness on this important issue.

Being involved with the film making of “Gratus” has changed my life and going to the Fargo Film Festival has been an experience of a lifetime- never to be FARGOtten!

From this journey, I’m now on a purposeful mission to bring awareness and break the stigma of mental health through sharing our award winning documentary and creating opportunities for open discussion on this important issue.

In fact, just recently Bus Stop Films together with Jewish House and the Australian Film Television and Radio, supported me to put on my first Mental Health Awareness event on May 1 2017. We opened the evening with a beautiful performance from Singer song writer, Ilan Kidron of Potbelleez.  We then screened Gratus and had a panel including me, Dr Kieran La Plastrier, Rabbi Mendel Kastel of Jewish House,  comedian and support worker from Partners in Recovery, Glenn Eisenberg and singer-song writer and social worker, Peter Miller Robinson discussion about strategies to deal with mental health including, gratitude, hope, humour and music.

When you feel grateful, your biochemistry changes; your energy and awareness is heightened towards bringing you greater good in your life. Gratitude is a powerful emotion and calibrates at a high level of energy and attraction. And this is what our film Gratus was all about.

” Gratus” will continue to be a tool to help start the discussion with many different audiences both domestically and abroad and I hope provide a spark to allow for me to make more films around mental health.

With gratitude —-it’s not that FAR-toGO just remember it is step-by-step.

“Hang in, it will pass, it’s not so Far to Go”- words said to comfort you when feeling depressed. Yet you’re feeling like you’re Going nowhere fast.

Many people living with mental health issues feel like they are never going to get better or out of the isolation and darkness.

However, with support and encouraging words like “you’ll make it, it will pass” it can help.

This is a poem I wrote, inspired by my journey with Gratus and the Fargo Film Festival

FARGO -NEAR TO MY HEART

It seems like you’re never GOing to get out of your situation but with support and friendship ……..it’s not so FAR-to-GO

Tears turns into near

FAR turns into near

Many Layers of thanks

FARther than we believed

No sun yet we glow

No sun yet so much Fun

Yes it’s not so FARtoGO

To learn more about Barbara as a speaker and advocate, visit; www.barbarabeinart.com

Check out this awesome digital story created by Barbara showcasing her journey with our program and Gratus!